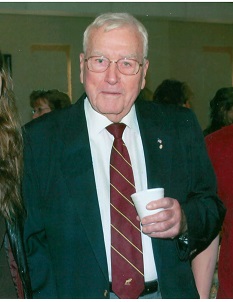 Raymond Edward Braswell of South Hill, VA passed away on December 29, 2020.
Ray was born on March 3, 1921 to Martha Mable Schisler Braswell and William Govan Braswell.
Besides his parents, Ray was predeceased by his wife, Louise “Lucy” Stewart Braswell, brother William “Bill”
Lawrence Braswell, and sisters, Ethel Braswell Ozmar and Kathleen “Kitty” Rebecca Braswell Godfrey.
He is survived by his daughter Lisa Braswell Estes and husband Cary, grandchildren Richmond Estes and
wife, Rachel, Trip Estes and wife Jessie Krafft, Meghan Stewart Estes, and Barklie Estes and wife Ally,
great - grandchildren, Emily Arenas, Ruby Lurina Estes, and Rhett Estes, and sisters Martha Schisler
Braswell Elliott and Betty Lou Braswell Jackson. Also surviving are many loving nieces and nephews.
Ray was a World War II veteran serving in the Pacific Theater. He retired from Virginia Power (VEPCO) in
1981 after 35 years of service.
He was a long-time member of the Lion’s Club. Ray belonged to the American Legion, the VFW, and the
Moose where he enjoyed volunteering with bingo for many years.
Ray was an avid hunter and fisherman for most of his life. He was the Virginia State Target Archery
Men’s Champion for 5 years running, from 1947 to 1951. He enjoyed gardening and sharing his
vegetables , especially tomatoes and asparagus which were his specialties.
Those who knew Ray knew him as a serious yet light-hearted person, and someone who loved deeply
and who was a loyal and true husband, father, father-in-law, grandfather, son, brother, and friend.
He was dearly loved and will be deeply missed.
Thank you to all the kind and loving people who cared for him at ManorCare. It truly means so much.
In lieu of flowers, the family suggest memorial donations be made to the charity of your choice.
In light of Covid 19, a private service for family members only will be held.
Crowder-Hite-Crews Funeral; Home, South Hill, VA. is serving the Braswell family.