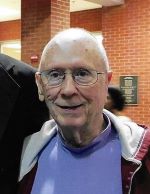 Harry Foster Hayes of Mechanicsville checked out on December 26th 2021. He is the son of the late Gladys and Wilbur Hayes and Born on July 22, 1937. He is the widower of Anne Hill Hayes formerly of Brodnax, VA. He is survived by his daughter Carolyn Anne Hayes Grubbs (Chip) and his son Mitchell Foster Hayes (Meredith). He is also survived by his siblings, Martha Holmes (Calvin), Fields A. Harris (Evette), Constance T Brown (Chris), a special nephew, Aysim Jackson and several aunts and uncles. He is also survived by four grandchildren, Foster and Peyton Grubbs, and Anja and Nicholas Hayes, as well as several grand-dogs and cats, all of Mechanicsville. He grew up in Lawrenceville, VA and was a graduate of Hargrave Military Academy and Virginia Commonwealth University. He was the former Chairman of the Board of Directors for Lawrenceville Brick, Inc. and retired Vice President and Treasurer for four subsidiaries of the Columbia Gas System. He served in the Virginia Army and National Guard and was a volunteer for AARP/IRS Tax Counseling for the Elderly and the Boy Scouts of America for which he was honored with their Award of Merit. He will be remembered by his friends for his mischief making, smiles, great hugs, and happy laughter. He was a good man who could fix almost anything. The neighbors frequently called upon him for help with pet sitting, ridding their yard of snakes, and even career counseling. Grandchildren were his greatest joy. Foster Grubbs named him Dandy, and it stuck. A memorial service will be held on January 15th at 11 at Chamberlayne Heights United Methodist Church in Richmond, with visitation following the service. The family requests that attendees wear masks. The burial will be on January 29th at 11 at Canaan Cemetery in Brodnax, VA. In lieu of flowers contributions may be made to one of two organizations in his honor: Hanover Humane Society, 12190 Washington Hwy, Ashland, VA 23005 or the Canaan Cemetery fund, Canaan Cemetery Association P.O. Box 237 Brodnax, VA 23920. Online condolences may be made through our website, www.crowderhitecrews.com. Crowder-Hite-Crews Funeral Home and Crematory is serving the Hayes family.